I love old things.  I am more comfortable in a dilapidated, run-down neighborhood than I am surrounded by clean, fresh, modern buildings.  I feel at home when I am in an old place.

With that said, it’s kinda comical that I have landed in a very sanitized, newly-built, standard suburb, where there is literally nothing old.

Well, I’m exaggerating a tiny bit . . . There are about 3 blocks of kinda old downtown in my little suburb, which includes one block of old homes where 3 out of the 4 homes there have been remodeled and turned into commercial properties.

The 4th old home on that block, the one that hasn’t been turned into a dentist or attorney’s office, is this one: I know it doesn’t look like much, but underneath that ivy is a real, true old, craftsman house. And as you can see, this last, little old house has been for sale.

I’ve dreamed of having a space to open my own shop.  Now don’t get your hopes up . . . The story of this post is not how I have bought this house and will be opening my own store.  In fact, it’s the exact opposite.

This little, old house has been for sale in my suburb for almost 2 years now, and for dirt cheap. Twice, my husband and I went to look at it.  We knew the lot alone was worth double the asking price, and were confident it’s low asking price was mainly due to the fact that everything in the house was completely original.  For most people in my new-loving suburb, that was a major minus.  But for me . . . It was a dream 🙂

When the first realtor showed it to us, in her words, it was ‘down to the studs” inside. When I stepped inside though, here is what I saw: It also had the original, solid-wood floors. As well as several built-in cabinetry spaces, fireplaces and mantles, and big-fat, craftsman style trim.  I was drooling as I walked through it.

It really would have been an absolutely perfect space to purchase and turn into my own shop. I could have sold paint, taught workshops, rented out space to other vendors . . . But the reality is that I just can’t pull that off in my current stage of life.

Remember I also have this going on? I know plenty of women out there are able to manage a full-time business and home life, but if I’m honest with myself, I am not. I don’t have the mental, emotional, or physical stamina to pull that off. It seemed like such a dream idea, but I knew the reality of it would be a disaster.

So after looking at the house twice, contacting a contractor for repair estimates, and watching the price continue to fall . . . We had to say no and let it go.

I’ve been watching for the past few months to see if anybody else has decided to buy it.  A few weeks ago while driving by, I saw this: 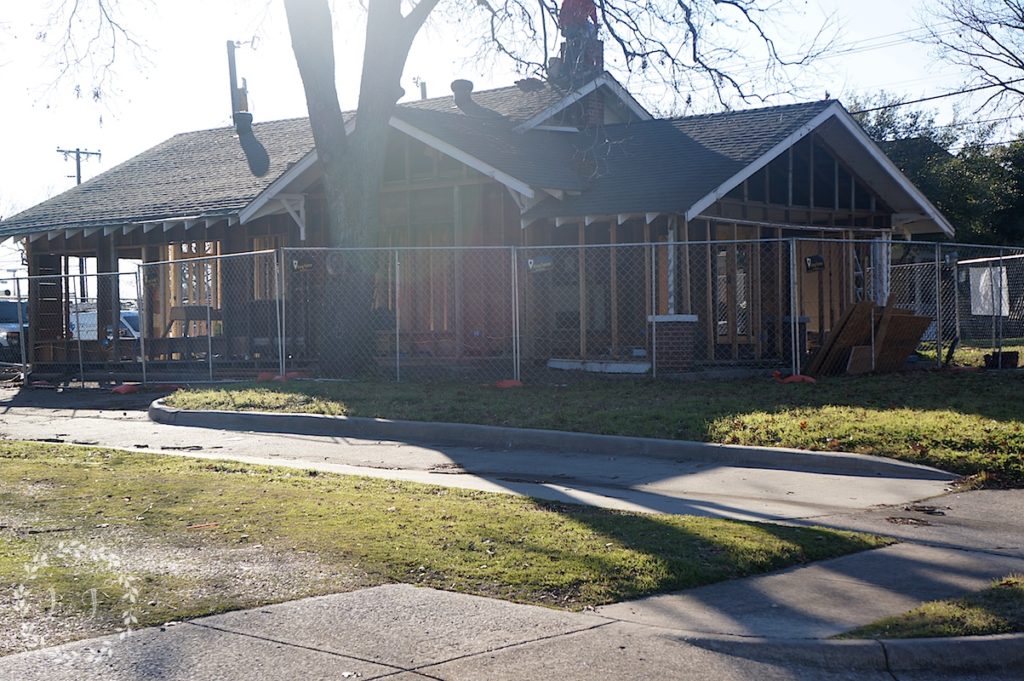 My heart literally sunk. Evidently someone else had bought it, and they were tearing it to pieces.  I cried while I drove home, so very sad that the one, last, truly old thing in town was being taken apart and made “modern.”

But I know I have to be true to myself and follow my gut instincts, along with the wisdom and direction of my husband.  I so desperately wanted to save this little house, redeem it and make it beautiful again.  It just wasn’t the right thing for our family though, no matter how badly I wanted it.

After wallowing in my pity party for a few days, I drove back by and saw a work crew outside. I decided to stop and see if anyone could tell me what their plans were for the house . . . Maybe they could tell me something that would help me feel a little better.

It was a small blessing that the owner of the restoration company working on the house was on site, and he graciously stopped to talk with me and tell me all about the new owners.  His company has been given the job to turn the house into hair salon, and according to him they are trying to keep as much original as they can. However, as I looked over at the giant pile of wood they had pulled off the house, I’m pretty sure his idea of “as much as they can” was probably way different than mine.

As I was staring at that giant wood pile, I had the thought to ask what his plans were for it all.  What did I have to lose?  He smiled and told me that it was all going into the trash, and said I would be more than welcome to dig through the pile and take whatever I wanted.

I was so excited that I almost hugged the man!  I told him I would be coming back with my truck, was he really sure I could take all that I wanted?  Sure, he said. So this is me (can you see my head popped up back there?), with my husband a few hours later, digging through that pile. It was full of headers, siding, beadbord, wood flooring, shiplap, doors, window pieces, even parts of the original porch columns.  We dug and dug and dug, taking every piece of chippy, white wood we could get our hands on.

After about an hour and a half, it was time to go pick up my youngest from preschool, so we had to stop.  I could see more things buried down deep that I wanted to get to, but we weren’t going to be able to get to them without taking down the whole pile. I hated leaving any of it there, but once again, it was time to walk away.

I know this may sound overly dramatic . . . It is just an old house and old wood anyway.  There are many more important things going on in the world, a fact which I am completely aware of.

But there was a little drama in it for me.  A small chance to reclaim some of the last, old house before it all disappeared. Once it’s gone, it’s gone for good. When it was all said and done, here is part of the stash were were able to bring home.  I was hoping to get enough of one certain kind of wood to use it in my home somewhere, maybe as a planked wall or trimming out a window, but it’s too much of a mish-mash of pieces.

So some it I am going to just sell as is–some of the old headers and beadboard pieces.  Some of the pieces I am going to keep and use to make some signs and other crafty things. The one big piece we did decide to keep though is the biggest header trim we pulled out of the pile. It’s probably around  an 8 ft piece, and it has some exterior wood locks on it.  I’m not sure where in my home it’s gonna go, but we will find a place for it. Then I will have another story to tell  when people see it and ask me where I found it 🙂

Please don’t get me wrong . . . I love where we live. I am so, very thankful to have a safe, clean place to raise my children.  I appreciate the convenience of my suburb lifestyle and really wouldn’t trade it.  But I do miss the character of old towns.  To me, there’s just something about places from the past that makes me smile.  I’m glad I was able to keep a few pieces of the last old house in town, to take them with me and keep them out of the dump.

And maybe one of these days I’ll try out the hair salon . . . or maybe not.  It might make me a little too sad to walk in and see everything new and shiny.